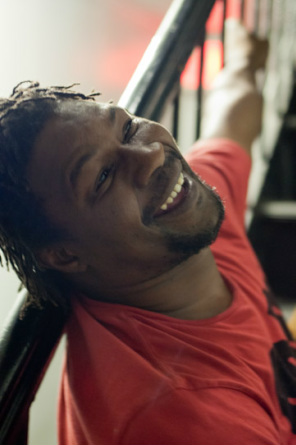 Sidike Conde was born March 25, 1961, in the city of Kankan in Guinea, West Africa. At the age of fourteen, polio left him almost completely paralyzed.

Conde was sent to live with his grandfather in a village deep in the forest, where he learned to manage his disability, building his upper-body strength so that he could walk on his hands. When it came time for the ceremony in which young men dance time-honored steps into manhood, he knew that if he did not participate, he would remain forever cut off from his community. He struggled to reconstruct the traditional steps by dancing on his hands instead of his feet, and his performance was met with applause.

Conde’s father, a military man, did not approve of his son’s art and forced him to attend a Muslim school. After three years, Conde ran away. In search of greater opportunities, Conde and his friends moved to the capital city, Conakry, where they organized Message de Espair (The Message of Hope), an orchestra of artists with disabilities recruited from the city’s streets. The troupe toured West Africa, performing and striving to change the perception of disabilities. Conde also developed programs to help those with disabilities gain job skills when he served as manager of operations for AJAFREIS, the National Association of the Republic of Guinea for the Handicapped.

In 1987, he became a member of Les Merveilles de Guinea, founded the year before by Komoko Sano, who urged him to learn the West African music and dance that the group performed. Conde became a soloist in the troupe and served as rehearsal master, composing and directing the company’s repertoire. He also worked as a musician and arranger with Youssou N’Dour, Salifa Keita, Baba Maal and other popular musicians. In 1998, Conde’s music brought him to the United States, and he founded the Tokounou All-Abilities Dance and Music Ensemble the next year. In the United States, he has continued to perform and teach, instructing people of all abilities in schools, hospitals and universities, and has served as artist in residence at a Bronx public school for children with multiple disabilities. In 2000, he hand-cycled across the United States for 22 days as part of World TEAM (The Exceptional Athlete Matters).

Today Conde lives in New York City with his wife Deborah Ross, a wildlife watercolorist. He teaches workshops at schools in New York City, including the Djoniba School and the Manhattan School for Children. In working with students, Conde emphasizes that dance transcends any disability. Tapping his chest, he says that the dance comes from inside. Music and dance, he says, saved him from a precarious existence. “It made me feel good,” he told The New York Times. “I want people to use me. I want to do something. I’m fine for working.”